As many of my blogging buddies know by now, I am a self proclaimed Disney nerd. I have grown up surrounding by disney movies, shows and toys. My family took multiple vacations to Disney world. I even worked in Disney world for a short period of time. With this information out there it is no surprise that distressing news like retiring a beloved character might get my panties in a twist.

Figment, is the purple dragon that appears in the Journey to Imagination ride in Epcot. This little guy’s ride has been through quite a few revamps  but he has been in the park for quite some time. The first revamp of the ride actually took Figment away and the people pushed back. Everyone wanted to see Figment back in the ride. Disney listened, and Disney returned Figment with another revamp. 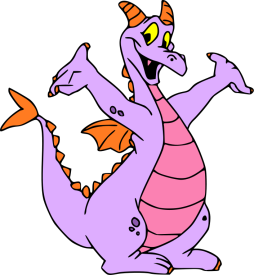 I will be the first to admit that Figment has not been the same since the original ride. Disney tried to do multiple things with the ride and the results have ranged from creepy to annoying. But Figment is still one of my favorite Disney characters hands- down. He has a place in the park and I hate to see rumors of him retiring.

Whats worse? The rumor is that Disney will replace him with Phineas and Ferb. Now, I get the idea of capitalizing on characters that have made the company money. However, I think there is something to be said for park only characters. Anyone who has not been to the park won’t know who Figment is but likely if they know someone who has been they will want to see him. Word of mouth is a powerful tool and I think a park only character is a draw for a larger audience (not that Disney needs any help luring guests!).

Figment was a ride that appealed to all ages (at least in its original form). Phineas and Ferb just by its association with a kids show will deter adults guests. I think this should seriously be considered before retiring the beloved dragon!

So I turn to you bloggers, is anyone else sad to hear of the possible retirement of Figment? If so, share this post! Get the word out and let Disney know you want Figment to stay. Disney listened once we just have to make sure they hear!