Anyone who has read this blog for any amount of time will know by now that I am sarcastic. Beyond sarcastic I am also brutally honest. This combination sometimes makes me come off as “mean”. There is something I want to make clear, often I am not trying to be mean, rather I am trying to be funny.

It has shocked me to learn that many (and I mean many) people do not understand nor appreciate sarcasm. My friends sarcasm is my second language, someone would even argue it is my primary language! I use it most often with the people I love. But there is something new I have learned that comes with sarcasm, people might think you are being arrogant.

This news came to me during our last book club meeting. The club had just read “A Walk in the Woods” by Bill Bryson and one of the comments was that they didn’t like that the author came off as “arrogant”. Now, I should state I am a very critical reader. If there is a detail to catch I will sniff that out like a bomb sniffing dog. And NOWHERE did I find this author being arrogant. In fact I found him rather funny. 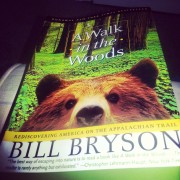 Just for a little background, the book is about a man (Bill Bryson) who set out to hike the Applachian Trail. He details his journey and all that happens along the way.

As the person started stating the reasons they found him arrogant I realized that his sarcasm was coming off as arrogance. Here were here reasons in generic terms for those who did not read the book:

1) He had less than positive thoughts about the complete strangers he met on the trail:

Alright, yes he did think parts of Georgia was not the greatest town to be in. Yes he did come across people who were not exactly hikers and made fun of them. But please remember 95 % of this “making fun” he did was in his own head. He did not actually make fun of these people to their face. Yes, he chose to write these observations in his book but I think he was poking fun at himself as much as he was about the people he ran across. Many of the people he thought were a little nutty actually ended up being helpful to him or better than him on some part of his journey. I think he was poking fun at his own pre concieved notions just as much as he was poking fun at others as he met them.

2) He made fun of others technology on the trail:

Alright at one point he met a man who had a completely useless device on the trail and he made a comment of “does it bake cookies.” Yes the man got mad. But I think the reader should remember the author just embarked on a hiking journey with a man who got so fed up with the weight of his backpack that he threw out food! Yes food! He might have been poking a little fun at this man but I think in his head he had a little more reason to do so.

3) He acted like he knew more than some of the experienced hikers (which he was not):

Alright, this one is a bit of an exaggeration. I think he fully embraced the fact that he was an amateur. Yes he liked to believe he knew more than others but that fact came crashing down around him. Culminating in the end of the trail when these young hikers just walked right by them while they tried to trudge through water. I think we were supposed to laugh at his confidence because it became clear by the end of the book despite how confident he felt, he couldn’t complete a trail even a “grandma” completed.

I think the problem is people often feel that if someone makes a dry, less than nice joke, that they are intending to be mean. But sarcasm has many shapes, forms and reasons. I think its important to look past the comment and delve deeper into the meaning behind the comment.

If anyone has actually read this book I would love to hear if you felt the author was arrogant. If you have not read the book do you feel sarcasm comes off as arrogance?

Browsing Facebook the other day I came across a pretty popular status that read:

“Dear little Caylee Anthony, last night on ET, they mentioned that your mommy (Casey Anthony) is going to make a lot of money off a book (her story) and a movie. Caylee, we the public promise you, “WE” will not buy either one. If you promise this to Caylee, then COPY and PASTE this…I DID! Let’s boycott this so she wont get rich from the murder of her BABY GIRL!!!!!! Please spread like wildfire. R.I.P CAYLEE ANTHONY ♥ Every friend on my facebook please make this promise…♥.”

Intrigued about this I decided to do a little research. To my disgust I learned that currently publishers are in a bidding war for Casey Anthony’s book as they feel “everyone wants to read her story”. To make matters worse the bids are in the $8 million dollar range!

Not only does this woman get off free and easy despite obvious neglect of her little girl but now she gets to make money off it too??

For those of you not familiar with the story I will give you a quick overview. Casey Anthony is a 22 year old woman whose daughter was reported missing in December 2008, her daughter’s name was Caylee. Caylee’s remains were later found in the woods. Casey was tried for first degree murder but was acquited of the charges because the prosecution failed to produce the necesary evidence and tried for the death penalty- a VERY hard sentence to get when there is not enough evidence to back things up.

Casey had a very good lawyer and she was painted as a habitual liar. There were so many holes in her story that the jury would have a hard time convicting her. This proved to be the case and she was let go despite the feeling all around the country that she was guilty of killing her daughter or at the very least was a neglectful mother which led to the death of her daughter.

Bloggers I know you like to read- we all do! But please I am begging you- DON’T BUY THIS BOOK! We all need to banned together to stop her from making money off her daughter’s death. This is not right! Please support this cause!

Even if you don’t agree please let me know what you think about this book and if you will be buying it!